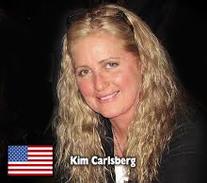 Kim Carlsberg, is a true pioneer in the ongoing efforts to the rapidly approaching Disclosure of the UFO / Extraterrestrial reality, and end to the governmental truth embargo of fifty years. Her bravery and sacrifice are appreciated by thousands of others who's lives were shattered in the wake of "contact". Kim was not only one of the first women to openly speak about the hybridization program within the alien abduction phenomenon, but went on to powerfully, visually illustrate the depth and complexity of her many contacts, through vivid color, in her first book: “Beyond My Wildest Dreams: Diary of a UFO Abductee”, published in 1995. The result stands unique amid the abduction writings of the time.

There was little known, or written about alien abduction in the 1980’s. Pre-internet, researching a subject that was barely known or named, was tantamount to a scavenger hunt. Kim’s courage and commitment to uncovering and sharing the truth of her haunting encounters cost her immensely. Striving to maintain sanity in her “normal” life that became battered with extreme heights of anguish, mental exhaustion and sleep deprivation, was monumentally challenging. But with the help of a few close friends, Kim was not only able to manage, but to eventually become one of the most credible witnesses to the most incredible phenomenon on Earth.

Kim’s unsought, new life direction was all encompassing. Discovering the origin and purpose to her (and others) intimately close encounters was paramount. Nothing could compete with the idea aliens might be controlling the world, even if it was only her world. Unwilling to pretend these incomprehensible events were not occurring to preserve the status-quo, Kim became a voice for the perhaps millions of contactees who were living secret lives. As a result, and at the height of success in life and love, Kim’s solid and familiar world rapidly slid into demise. Career opportunities were severely compromised, her primary relationship crushed under the weight of alien abduction, routine ridicule by friends, family, and a new-found set of hostile disbelievers crushed her emotionally.

Other sinister forces entered the picture… phone taps… black helicopters… and brutal military abductions. Upon deep examination of these life altering events, Kim realized that the foundations of life she had grown to understand were actually profound illusions, and our true reality had been intentionally, and masterfully concealed under impenetrable layers of deceit. This sent her on a life-long investigation: who are we, who are they, and what is the purpose of this clandestine communion.

Approaching two decades later, despite the rocky road that now lies behind her, today, Kim appreciates the gifts she has received as a result of her relationship with “the others.” The list is long: the rare personal proof that we are not alone, heightened PSI abilities such as empathy, telepathy, precognition and more; a passionate love, respect and concern for, not only our precious mothership Earth, but for all life and all beings, physical and non-physical, in this abundantly occupied omni-verse